So it's cold and wet and a bit miserable frankly. Not much to tempt a body outside. I have to say that I haven't been greatly enthused with the big exhibitions on offer. I have no real love for Manet, though I did go to his show( more on that later), but George Bellows caught my eye. The poster for his show is a raw and mesmerising picture of two boxers hard at it. 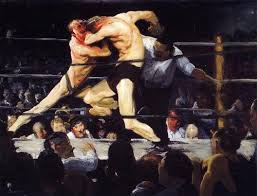 It's a wonderful exhibition, George Bellows was an American Realist painter from the first quarter of the 20th century. He was born in New York to two relatively old parents. He died young not reaching the age his mother was when she gave birth to him.

This is my favourite piece.

Sadly this picture does not do justice to the colours of the sky which are a shocking azure smudged with gold and reddy browns. Love this picture. That huge monolith in the background is so ominous.

That sky is one I may just use. In fact I enjoyed nearly all his colour palate. Very inspirational. I did prefer his earlier works to his later. His rendition of people reminded me a lot of Lucian Freud.